By the Archimedean Principle:

By the Well-Ordering Principle, there exists $m \in \N$ such that $m$ is the smallest element of $M$.

and, by definition of smallest element:

where $r$ can be found as above.

All cases have been covered, and the result follows.

When this proof was first published in 1975: W.A. Sutherland: Introduction to Metric and Topological Spaces, there was a mistake in it: 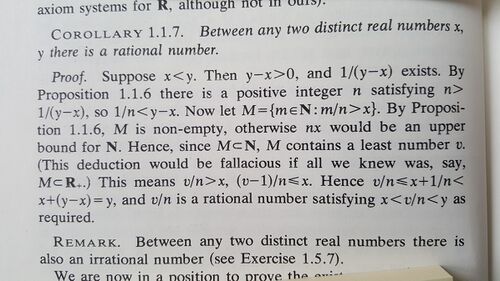 This was corrected in the second printing, along with an apologetic note:

Preface to reprinted edition
I am grateful to all who have pointed out errors in the first printing
(even to those who mentioned that the proof of Corollary 1.1.7
purported to establish the existence of a positive rational number
between any two real numbers). In particular ...