From ProofWiki
< Brachistochrone is Cycloid
Jump to navigation Jump to search

The shape of the brachistochrone is a cycloid. 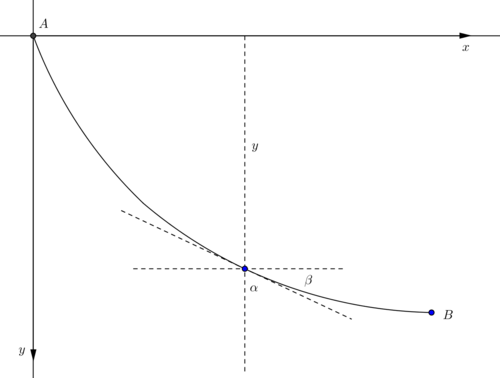 We invoke a generalization of the Snell-Descartes Law.

This is justified, as we are attempting to demonstrate the curve that takes the smallest time.

By the Principle of Conservation of Energy, the speed of the bead at a particular height is determined by its loss in potential energy in getting there.

Combining all the above equations, we get:

where $c$ is another (more convenient) constant.

This is the differential equation which defines the brachistochrone.

Now we solve it:

Now we introduce a change of variable:

Now we can look again at our expression for $y$:

which are the parametric equations of the cycloid.

The Brachistochrone Problem was raised by Johann Bernoulli to the readers of Acta Eruditorum in June $1696$.

Isaac Newton interpreted the problem as a direct challenge to his abilities, and (despite being out of practice) solved the problem in the evening before going to bed.

He published it anonymously, but Bernoulli recognised whose solution it was, and commented:

I recognise the lion by his print.

Bernoulli published the solution in the Acta Eruditorum in May $1697$, along with solutions by Jacob Bernoulli and Gottfried Wilhelm von Leibniz.

With justice we admire Huygens because he first discovered that a heavy particle slides down to the bottom of a cycloid in the same time, no matter where it starts. But you will be petrified with astonishment when I say that this very same cycloid, the tautochrone of Huygens, is also the brachistochrone we are seeking.