Let a rope be knotted at regular intervals so that there are $12$ equal segments separated by knots.

Tie the rope in a loop consisting of those $12$ segments.

Fix one of the knots to the ground at the point you want the right angle to be placed.

Stretch the rope tightly in the direction of one of the legs of the right angle you want to create and fix the fourth knot to the ground.

Stretch the rope tightly in the direction of the other leg of the right angle you want to create and fix the third knot in the ground, at the same time making sure the remaining segment of $5$ knots is also tight. 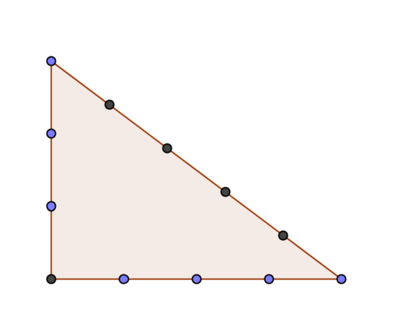 and so by Pythagoras's Theorem the triangle is right angled.

It was been suggested by Moritz Cantor that the technique for Construction of Right Angle by Stretched Rope may have been used by the ancient Egyptians to survey their fields.

It is believed that they were aware of the properties of the $3-4-5$ triangle, and so this is a feasible hypothesis, but no evidence exists that they ever used this specific technique.

Despite the fact that there exists no evidence for this, it is sometimes seen reported as though it were a 'well-known fact', whereas it is nothing of the sort.