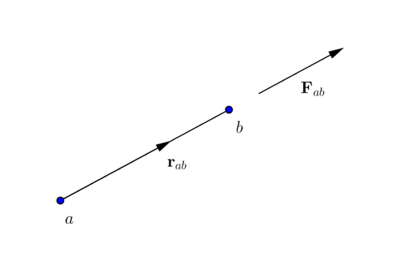 Let $a$ and $b$ be stationary particles in a vacuum, each carrying an electric charge of $q_a$ and $q_b$ respectively.

Then $a$ and $b$ exert a force upon each other whose magnitude and direction are given by Coulomb's law (of electrostatics):

$\mathbf F_{a b}$ is the force exerted on $b$ by the electric charge on $a$
$\mathbf r_{a b}$ is the displacement vector from $a$ to $b$
$r$ is the distance between $a$ and $b$.
the constant of proportion is defined as being positive.

In SI units, the law becomes:

This entry was named for Charles-Augustin de Coulomb.

Charles-Augustin de Coulomb proposed what is now referred to as Coulomb's Law in the year $1785$.