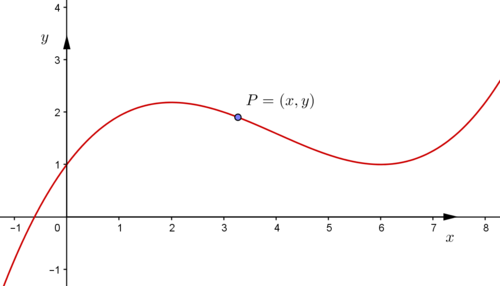 The term abscissa was used by Leonardo Fibonacci in his $1220$ work Practica Geometriae.

Some sources suggest that the word descends from translations of Conics by Apollonius.

Its use in the modern sense, as meaning the $x$ coordinate of a point in a Cartesian plane, may have been due to Stefano degli Angeli in his $1659$ work Miscellaneum Hyperbolicum, et Parabolicum.

The term entered the mathematical mainstream via the works of Gottfried Wilhelm von Leibniz, and some suggest that he may even have coined it.

The term abscissa comes from the Latin term linea abscissa, which means a line cut off.

Some sources suggest that the word descends from translations of Conics by Apollonius, where the Greek word ἀποτεμνομέναις (apotemnomenais) appears.

The word is rarely used nowadays except in the context of the history of mathematics.

Its plural is correctly abscissae or (to be even more strictly classically correct) abscissæ.

However, the plural form of the term (when it is used at all) is commonly abscissas.

$\mathsf{Pr} \infty \mathsf{fWiki}$ has no strong opinion on what plural form is used, as it is considered obsolete and is not expected to appear often.