This page has been identified as a candidate for refactoring.

Betweenness is one of the undefined terms in Tarski's Geometry.

However as line segment has not yet been defined, we are not allowed to call upon it at this stage.

We offer an ostensive definition: 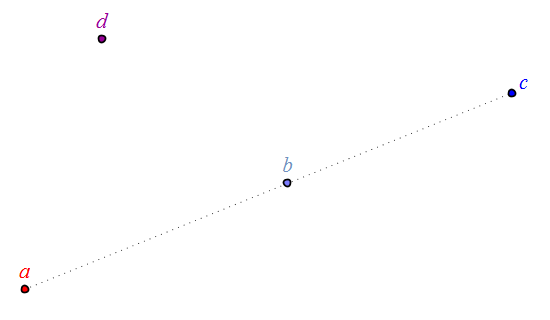 Define the following coordinates in the $xy$-plane:

As a justification of this definition, consider the case where $\Delta x_1, \Delta x_2 \ne 0$.

Hence, the right triangles with hypotenuses $ab$ and $bc$ are similar.

Furthermore, the hypotenuses are parallel, because they have the same slope.

They are similarly oriented because $\Delta x$ is by construction parallel to the $x$-axis, $\Delta y$ to the $y$-axis.

They are touching because there are only three points under consideration.