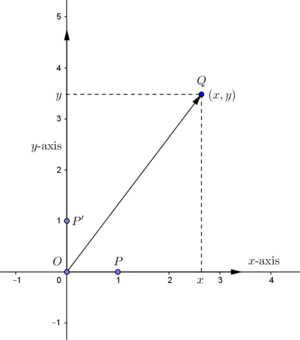 A generic point in the Cartesian Coordinate Plane

The points in the plane can be identified uniquely by means of a pair of coordinates.

Two perpendicular straight lines are chosen. These are understood to be infinite. These are called the axes.

The usual directions to make these are:

The point of intersection of the axes is called the origin.

A unit length is specified.

The real numbers increase to the right on the $x$-axis, upwards on the $y$-axis.

Thus the plane can be identified with the cartesian product $\R^2$.

In this context, $\R^2$ is called the (cartesian) coordinate plane.

Identification of Point in Plane with Ordered Pair

Every point on the plane can be identified by means of a pair of coordinates $\tuple {x, y}$, as follows:

Identify one distinct point on the plane as the origin $O$.

Select a point $P$ on the plane different from $O$.

Let the distance from the origin to $P$ be defined as being $1$.

Draw an infinite straight line through $O$ and $P$ and call it the $X$-axis.

Draw an infinite straight line through $O$ perpendicular to $OP$ and call it the $Y$-axis.

The plane is then conventionally oriented so that the $X$-axis is horizontal with $P$ being to the right of $O$.

Thus the $Y$-axis is then a vertical line.

Thus the point $Q$ can be uniquely identified by the ordered pair $\tuple {x, y}$ as follows:

The distance of the line segment from $Q$ to the $Y$-axis is known as the $X$ coordinate and (usually) denoted $x$.

The $X$ coordinate of all points on the $Y$-axis is zero.

The distance of the line segment from $Q$ to the $X$-axis is known as the $Y$ coordinate and (usually) denoted $y$.

The $Y$ coordinate of all points on the $X$-axis is zero.

The cartesian coordinate plane is often seen referred to as the $x y$-plane, or (without the hyphen) the $x y$ plane.

Some sources refer to it as the Euclidean plane, but on $\mathsf{Pr} \infty \mathsf{fWiki}$ that term is reserved for the abstract geometry consisting of $\R^2$ together with the set of straight lines.

The Cartesian plane was supposedly invented by René Descartes.

However, a study of the literature will reveal that this idea originated considerably earlier, perhaps going back as far as Nicole Oresme.