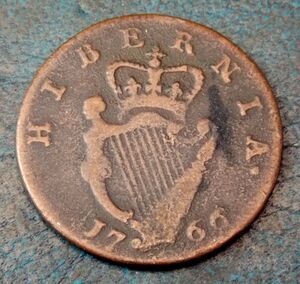 It has been suggested that this device has other uses, but social anthropologists are divided as to what they might be. Perhaps they can resolve their differences by tossing a coin.

The faces of a coin are known as its sides.

They are distinguished one from another by means of different designs.

The head of a coin is the side which traditionally bears an image of the head of state of the nation to which the coin is issued.

The tail of a coin is the opposite side to its head.

It traditionally bears an image of cultural or historical significance to the nation to which the coin is issued.

It is usual to consider that there is an equal probability for a coin to land either heads or tails. Such a coin is called a fair coin.

However, discs of metal can crafted to look like coins, but with a higher probability of landing on one side rather than the other.

Such a device is known as a biased coin.

It is worth mentioning that as the manufacture of coins is such that the design on either side is embossed in the metal itself, their physical nature is such that they are by definition asymmetric.

Hence by their very nature all coins are to a certain extent biased to a more-or-less minute degree.

Skilled tossers are rumoured to be able to take advantage of this fact.

Coin-tossing is a technique to select randomly one of two options. The usual scenario is to resolve an issue between two parties. The most usual of these is to determine which of the two parties is to choose whether to take the first move, or otherwise determine the starting arrangement, in a game or sport.

A coin is thrown into the air in such a manner that it turns over and over. This can be conveniently achieved by coiling the hand into a loose fist, balancing the coin on the first knuckle of the index finger, and then pinging the thumb up from under the index finger by a physical process derived from the science of catastrophe theory. The nail of the thumb will then impact smartly against the edge of the coin which projects over the edge of the index finger's knuckle, propelling it upwards in such a manner that, by an application of the physics of angular momentum, it will be caused to rotate more-or-less rapidly about a diameter.

When it descends, the side which will remain uppermost will be dependent upon both the speed of rotation and the distance travelled, neither of which is easy to gauge precisely enough to make the process predictable.

The descending coin will either be caught in the hand by the one flipping it (the "tosser"), to be immediately clasped to the back of the other hand, or allowed to fall directly to the ground. The other party (the "caller") is offered the chance of guessing which of the two sides of the coin is on top. The two sides are usually referred to (in the English-speaking world) as "heads" and "tails". The "heads" side tends to be the one that features the head of state of the nation to which the coin belongs, while the "tails" is the other side.