Let $\closedint a b$ be a closed real interval.

Then the definite (Darboux) integral of $f$ over $\closedint a b$ is defined as:

More usually (and informally), we say:

$f$ is (Darboux) integrable over $\closedint a b$.

The expression $\displaystyle \int_a^b \map f x \rd x$ can be (and frequently is) interpreted as the area under the graph. This follows from the definition of the definite integral as a sum of the product of the lengths of intervals and the "height" of the function being integrated in that interval and the formula for the area of a rectangle.

A depiction of the lower and upper sums illustrates this: 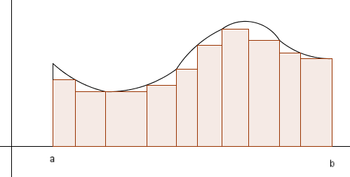 It can intuitively be seen that as the number of points in the subdivision increases, the more "accurate" the lower and upper sums become.

Also note that if the graph is below the $x$-axis, the signed area under the graph becomes negative.

it is a popular approach on an introductory course of integral calculus to teach the Darboux integral, but then to call it the Riemann integral.

Technically it is not, but the difference is ultimately immaterial.

There may be instances on $\mathsf{Pr} \infty \mathsf{fWiki}$ where the term Riemann integral is used but Darboux integral is what is meant.

As this is suboptimal and feeds the confusion between the two, they are to be amended whenever they are encountered.

This entry was named for Jean-Gaston Darboux.