From ProofWiki
(Redirected from Definition:Ostomachion)
Jump to navigation Jump to search

The loculus of Archimedes is a dissection of the square into $14$ pieces: 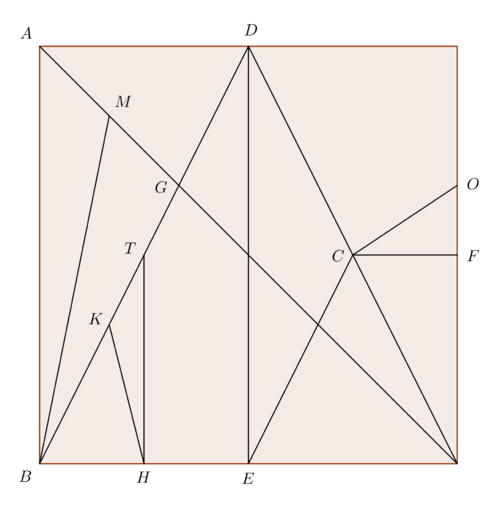 The dissection is constructed as follows:

The object is to rearrange the pieces to form different geometric figures.

The loculus of Archimedes is also known as:

Spellings vary according to the language into which the original Greek is transliterated.

Using the shapes in the loculus of Archimedes exactly once each, make the shape of an elephant:

This entry was named for Archimedes of Syracuse.

The loculus of Archimedes appears in a fragmentary form in an Arabic manuscript The Book of Archimedes on the Division of the Figure Stomaschion.

It also in the Archimedes Palimpsest which was discovered by Johan Ludvig Heiberg in $1906$.

Note that the version in the Archimedes Palimpsest is presented in rectangular form, and has been transformed here into a square, so as to match its usual presentation.

The word loculus is Latin for little box.

The word Ostomachion derives from the Greek Ὀστομάχιον, which means bone-fight, from ὀστέον (osteon), meaning bone, and μάχη (mache), which means fight, battle, or combat.

That is, it is a combat (with the mind), a puzzle, whose tools are pieces manufactured out of bones, or pieces of ivory.

The word Stomachion, which appears in some ancient manuscripts, appears to be a corruption of Ostomachion.

While some sources state that stomachion derives from the word stomach (perhaps because the dissection problems cause disruption to one's digestion), this is believed to be a common mistake.