The sine of an angle in a right triangle can be extended to the full circle as follows: 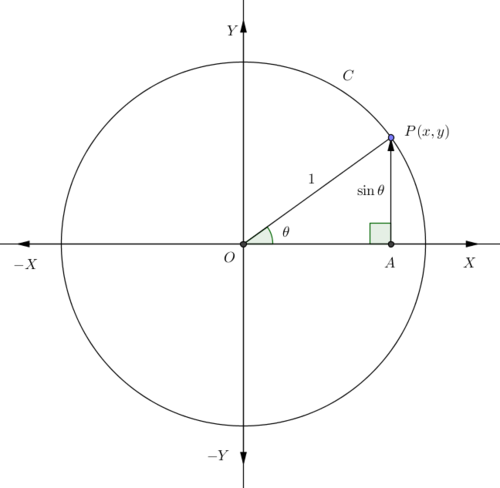 Then the sine of $\theta$ is defined as the length of $AP$.

Hence in the first quadrant, the sine is positive.

It was Hipparchus of Nicaea who first compiled tables relating the length of the arc of a circle and the length of the chord which gives rise to it, for various angles subtended by the arc. However, he did not actually define the concept of a sine as such.

The sine was first discussed by Aryabhata the Elder, under the name ardha-jyā, which means half-chord.

The the symbol $\sin$ for sine appears to have been invented by William Oughtred in his $1657$ work Trigonometrie, although some authors attribute it to Euler.

The sine was originally written about by Aryabhata the Elder, under the name ardha-jyā.

The word jyā is a Sanskrit word meaning bow-string, and in the mathematical context means the chord of a circle.

Thus the word ardha-jyā literally means half-chord. Later the first part of the word tended to be omitted, thereby leaving the word jyā.

When the word jyā was translated into Arabic, it was interpreted as jiba. Vowels in Arabic are omitted, leaving the word jb. The word jiba in Arabic is meaningless.

When Robert of Chester came to translate these works in the 12th century, he interpreted jb as the word jaib, meaning pocket or fold (in clothing).

This he translated into Latin as sinus which has several meanings, of which fold is one, and curve, winding or bay are others.

Some sources credit Gerard of Cremona for this mistranslation, but it appears that he may have been following Robert, whose $1145$ translation takes precedence.

The word sine is pronounced the same way as the English word sign.