This metric is often seen in the context of the real number plane $\R^2$ and general real vector space $\R^n$:

The taxicab metric on $\R^n$ is defined as: 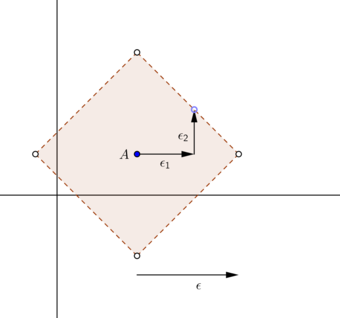 Neither the boundary lines nor the extreme points are actually part of the open $\epsilon$-ball.

Imagine a city whose streets form a grid pattern. That is, all the streets run, for example, either North-South or East-West.

It is assumed that one can travel only along the streets.

The driver of a taxicab constantly needs to know the distance between any two points in the city.

However, that distance is measured not directly, but along the streets of the city.

Hence the distance between any two points in a taxicab metric is measured as the sum of the difference between the corresponding coordinates of those points.

The notation is awkward, because it is necessary to use a indexing subscript for the $n$ metric spaces contributing to the product, and also for the $p$th exponential that defines the metric itself.

Thus the "prime" notation on the $n$ metric spaces.