From ProofWiki
(Redirected from Definition:Turn On)
Jump to navigation Jump to search

This page has been identified as a candidate for refactoring. In particular:
Make a formal page for each of Off and On

The Heaviside step function on $c$ is the real function $u_c: \R \to \R$ defined as:

There is no universal convention for the value of $\map {u_c} c$.

However, since $u_c$ is piecewise continuous, the value of $u_c$ at $c$ is usually irrelevant.

The graph of the Heaviside step function is illustrated below: 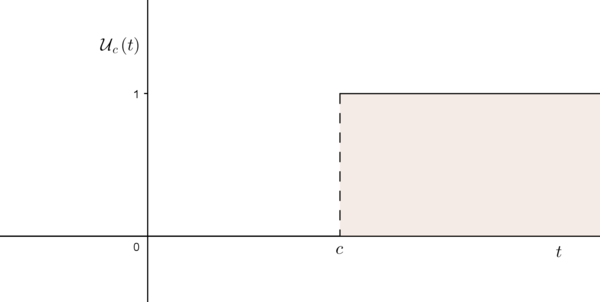 The Heaviside step function can also be denoted:

Variants of the letter $u$ can be found:

Some sources bypass the need to use a subscript, and present it as:

This is also called the unit step function.

If $t$ is understood as time and $f$ some function of time used to model some physical process, then:

is often understood as:

This entry was named for Oliver Heaviside.