Edge of Polyhedron has no Curvature

This article needs to be linked to other articles.
You can help $\mathsf{Pr} \infty \mathsf{fWiki}$ by adding these links.

Once you have done so, you can remove this instance of {{MissingLinks}} from the code.

The edge of a polyhedron has zero curvature. 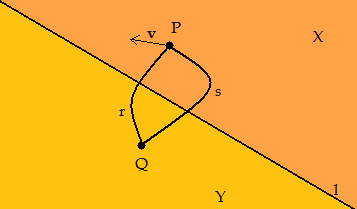 Let $X$ and $Y$ be two separate faces of a polyhedron separated by the edge $l$.

The curvature inside an infinitesimal region $\delta a$ is given by the net angular displacement $\delta\theta$ a vector $v$ experiences as it is parallel transported along a closed path around $\delta a$.

The curvature is then given by:

We must then prove that the vector $v$ experiences no net angular displacement as it is parallel transported from $P$ to $Q$ and back to $P$.

As the vector is parallel transported along the open curve $r$, it crosses the edge between the two faces $X$ and $Y$.

In doing so, it gains a finite angular displacement $\delta\theta_1$.

Then, when the vector is transported back along the open curve $s$, it gains another angular displacement $\delta\theta_2$.

Notice that because it is not being transported the other way (from $Y$ to $X$), the new angular displacement will be:

The curvature inside the region $\delta a$ is therefore given by: