Let a cartesian plane be arranged so that the y-axis passes through the lowest point of the catenary.

The catenary is described by the equation:

where $a$ is a constant.

The catenary is described by the equation:

where $a$ is a constant.

This curve is called a catenary.

Let $s$ be the length along the arc of the chain from the lowest point to $\tuple {x, y}$.

Let $w_0$ be the linear density of the chain, that is, its weight per unit length.

The section of chain between the lowest point and $\tuple {x, y}$ is in static equilibrium under the influence of three forces, as follows:

As the chain is (ideally) flexible, the tension $T$ is along the line of the chain, and therefore along a tangent to the chain. 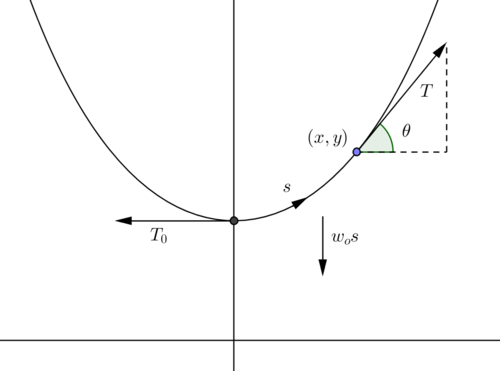 We can resolve this system of forces to obtain the horizontal and vertical components:

Differentiating with respect to $x$:

From Derivative of Arc Length, we have:

So we have this differential equation to solve:

This can be solved by Separation of Variables:

The right hand side is worked by using Primitive of Constant:

After some algebra, this gives us:

By Derivative of Exponential Function, we get:

We end up with:

which is what we wanted to show.

Take the equation of the catenary according to Formulation 1:

Put this in a form which uses the hyperbolic cosine:

The problem of determining the shape of the catenary was posed in $1690$ by Jacob Bernoulli as a challenge.

It had been thought by Galileo to be a parabola.

Huygens showed in $1646$ by physical considerations that it could not be so, but he failed to establish its exact nature.

In $1691$, Leibniz, Huygens and Johann Bernoulli all independently published solutions.

It was Leibniz who gave it the name catenary.

From a letter that Johann Bernoulli wrote in $1718$:

The efforts of my brother were without success. For my part, I was more fortunate, for I found the skill (I say it without boasting; why should I conceal the truth?) to solve it in full ... It is true that it cost me study that robbed me of rest for an entire night. It was a great achievement for those days and for the slight age and experience I then had. The next morning, filled with joy, I ran to my brother, who was still struggling miserably with this Gordian knot without getting anywhere, always thinking like Galileo that the catenary was a parabola. Stop! Stop! I say to him, don't torture yourself any more trying to prove the identity of the catenary with the parabola, since it is entirely false.

However, Jacob Bernoulli was first to demonstrate that of all possible shapes, the catenary has the lowest center of gravity, and hence the smallest potential energy.

This discovery was significant.