The external angle of a triangle equals the sum of the other two internal angles.

In any triangle, if one of the sides be produced, the exterior angle is equal to the two interior and opposite angles, and the three interior angles of the triangle are equal to two right angles. 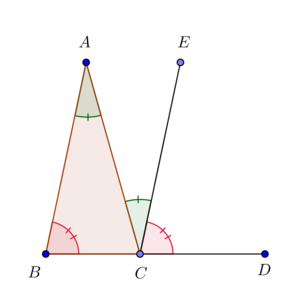 Construct $CE$ through the point $C$ parallel to the straight line $AB$.

We have that $AB \parallel CE$ and $AC$ is a transversal that cuts them.

Similarly, we have that $AB \parallel CE$ and $BD$ is a transversal that cuts them.

Combining $\paren 1$ and $\paren 2$ and using Equality is Transitive:

By using Equality is Symmetric:

This theorem is referred to by some sources as the Interior Angles Theorem, and by others as the Exterior Angle Theorem. These names, however, are also used to refer to other theorems.

In the wake of such possible confusion, it is prudent not to refer to it by name at all, but by description, as has been done on $\mathsf{Pr} \infty \mathsf{fWiki}$.

This theorem is the first part of Proposition $32$ of Book $\text{I}$ of Euclid's The Elements.

Euclid's proposition $32$ consists of two parts: the first of which is this, and the second part of which is Sum of Angles of Triangle equals Two Right Angles.

It is not known for certain, but this theorem is traditionally ascribed to Pythagoras.

However, it is plausible that Pythagoras himself received it (either directly or indirectly) from Thales of Miletus, who may well have used it in his proof of what is now known as Thales' Theorem.