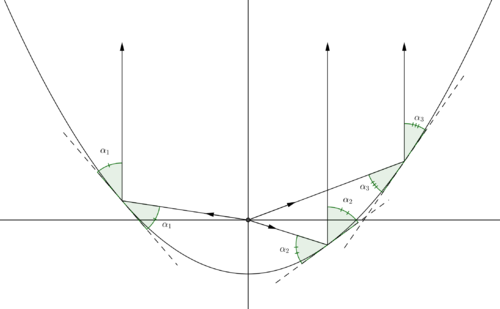 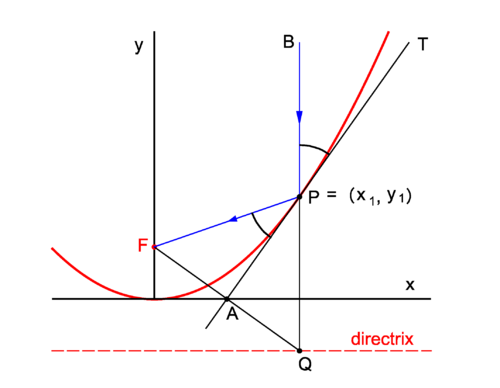 We now consider the two triangles $APQ$ and $APF$.

They have an equal side, $AP$, and an equal angle, $\angle APQ = \angle APF$, and by the Triangle Side-Angle-Side Equality triangles $APQ$ and $APF$ will be equal if and only if $FP$ and $PQ$.

From the definition of a parabola it is the locus of the points that are equidistant from the focus and the directrix; hence the point $F$ is the focus.

The above proof and the accompanying diagram show that the tangent $AP$ bisects the angle $\angle FPQ$.

In other words, the tangent to the parabola at any point bisects the angle between the lines joining the point to the focus and perpendicularly to the directrix.

Reflection of light striking the convex side

If light travels along the line $QP$, it moves parallel to the axis of symmetry and strikes the convex side of the parabola at $P$. By Two Straight Lines make Equal Opposite Angles it is clear from the above diagram that this light will be reflected directly away from the focus, along an extension of the line $FP$.