Kepler's second law of planetary motion is one of the three physical laws of celestial mechanics deduced by Johannes Kepler:

The line joining the sun and a planet sweeps out equal areas in equal times. 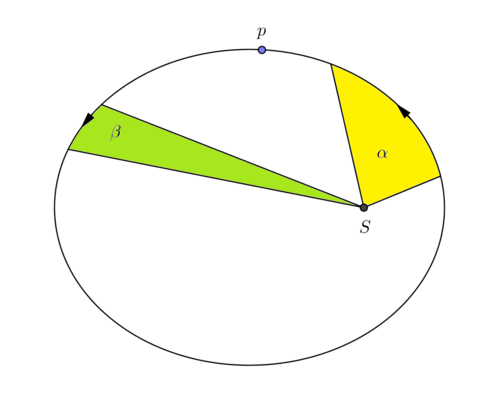 By definition of the gravitational field, $\mathbf F$ is a central force.

From Derivative of Angular Component under Central Force:

for some constant $h$.

Without loss of generality, assume that $h > 0$, which means that $p$ is travelling in the direction of positive $\theta$.

Let $\map A t$ be the area swept out by $\mathbf r$ in time $t$ relative to some fixed point of reference.

For a small angle $\delta \theta$, the area $\delta A$ can be approximated to the area of a sector of a circle.

and so in the limit: