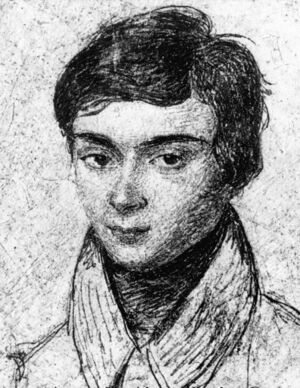 French mathematician famous for dying at the age of 20 as the result of a duel.

Despite his total collected works amounting to a mere 60 pages or so, he had a significant influence in the development of the field of group theory. He was in fact the first person to use the word group in a technical sense.

His innovative approach to the problem of the insolubility of the quintic led to the field known now as Galois theory.

There has been a lot of old rubbish written about Galois, not least the overly-romanticised account of his life as given by Eric Temple Bell in his Men of Mathematics.

For a rather more balanced and sober account, see the Historical Introduction in Ian Stewart's Galois Theory, 3rd ed..

Results named for Évariste Galois can be found here.

Definitions of concepts named for Évariste Galois can be found here.