From ProofWiki
< Mathematician:Mathematicians‎ | Sorted By Birth
Jump to navigation Jump to search

For more comprehensive information on the lives and works of mathematicians through the ages, see the MacTutor History of Mathematics archive, created by John J. O'Connor and Edmund F. Robertson.

The army of those who have made at least one definite contribution to mathematics as we know it soon becomes a mob as we look back over history; 6,000 or 8,000 names press forward for some word from us to preserve them from oblivion, and once the bolder leaders have been recognised it becomes largely a matter of arbitrary, illogical legislation to judge who of the clamouring multitude shall be permitted to survive and who be condemned to be forgotten.

Heron (or Hero) of Alexandria (Greek: Ἥρων ὁ Ἀλεξανδρεύς) was a Greek mathematician and engineer.

Famous for writing about the aeolipile, otherwise known as Hero's Engine (although he didn't actually invent it), and the device known as Heron's fountain.

Also noted for Heron's formula for calculating the area of a triangle whose side lengths are known.
show full page

Neo-Pythagorean about whom very little is known.

Unusual in that he used the system of Arabic numerals rather than the then-current cumbersome Roman numerals.

Famously made some conjectures about perfect numbers which were soon shown to be false.

Appears to have had more influence than his (perhaps limited) abilities may have merited.
show full page

Greek philosopher and mathematician, whose works were strongly influenced by the Pythagorean school of thought.

Made astronomical observations of Mercury and Venus between 127 and 132, as reported by Claudius Ptolemy.
show full page

Very little is known about him.
show full page

Roman citizen, of either Greek or Egyptian ancestry.

Best known for being the author of several scientific works, including Almagest.
show full page

Author of a series of books called Arithmetica, some of which are now lost, concerning the solution of algebraic equations.

Sometimes referred to as "the father of algebra", but some claim the title should belong to Al-Khwarizmi.
show full page

Edited and published a book with solutions to mathematical problems presented in Chiu Chang Suann Jing ("Nine Chapters on the Mathematical Art"), in which he gave:

a calculation of $\pi$ (pi) correct to $4$ decimal places
proof of the formulae for the volume of the square pyramid and tetrahedron.

Usually known as Iamblichus. His name in Ancient Greek is Ἰάμβλιχος, probably from Syriac or Aramaic ya-mlku, "He is king".

Assyrian philosopher of the neo-Platonist school.

His main involvement in mathematics concerns the fact that he may have known the $5$th perfect number, but there is no hard evidence of this fact.
show full page

One of the last great Greek mathematicians of antiquity.

Very little is known about him, except that he flourished at around 320 CE through dint of the eclipse of the sun in Alexandria in that year which he discussed in his commentary on Claudius Ptolemy's Almagest.

Noted for his multi-volume Collection, and for Pappus's Hexagon Theorem.
show full page

Egyptian mathematician known for his commentary on the Conics of Apollonius of Perga.

This is now lost. We know about it through the writings of Theon of Alexandria.

Also wrote at least two original works of his own, whose survival is directly due to their association with Conics.
show full page

Best known for being the father of Hypatia of Alexandria.

His edition of Euclid's The Elements was an authority until well into the $19$th century.
show full page 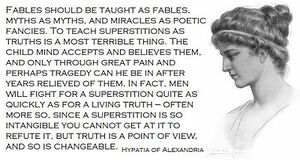 Her death has been argued as signalling the decline of learning in the Western world, and the start of the "dark ages", from which recovery would not happen for another thousand years.
show full page

Best known for his work on Diophantine equations. His work is the source of the Chinese Remainder Theorem.
show full page

Greek philosopher who among other things produced a commentary on Book $\text I$ of Euclid's The Elements.
show full page

Derived the most accurate approximation for $\pi$ for over nine hundred years.

Credited (along with Zu Geng) with proving the volume of the sphere using the same principle as Bonaventura Francesco Cavalieri.
show full page

One of the two main Byzantine Greek architects (with Anthemius of Tralles) that Emperor Justinian $\text I$ commissioned to design the church of Hagia Sophia in Constantinople from $\text {532}$ – $\text {537}$.

Chinese mathematician who determined how to compute the diameter of a sphere of a given volume. He did this using a generalized version of Cavalieri's Principle.
show full page

An early believer in the irrationality of $\pi$, and developed an approximation for it of $3.1416$.

Developed a positional system of numerals in c. $500$, but it lacked a symbol for zero.
show full page

Roman senator, consul, magister officiorum, and philosopher, who produced editions of some mathematical works which survived to be used throughout Medieval Europe.

Although widely cited as a great scholar, as a mathematician he appears to have been mediocre.
show full page

Palestinian philisopher about whom little is known. He wrote commentaries on works of Apollonius and Archimedes.

It is possible that Eutocius studied in Alexandria and became its head.
show full page