Maximum Rate of Change of Y Coordinate of Astroid

Let $C_2$ be embedded in a cartesian coordinate plane with its center $O$ located at the origin.

Then the maximum rate of change of the $y$ coordinate of $P$ in the first quadrant occurs when $P$ is at the point where: 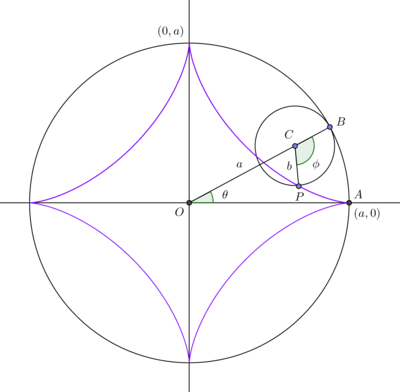 The rate of change of $\theta$ is given by:

From Equation of Astroid: Parametric Form, the point $P = \left({x, y}\right)$ is described by the parametric equation:

The rate of change of $y$ is given by:

By Derivative at Maximum or Minimum, when $\dfrac {\mathrm d y} {\mathrm d t}$ is at a maximum:

From Equation of Astroid: Cartesian Form: