Multiplication of Real Numbers is Right Distributive over Subtraction

Let $AG, CH$ subtracted from them be equimultiples of the same two $E, F$.

We need to show that the remainders $GB, HD$ are either equal to $E, F$ or are equimultiples of them. 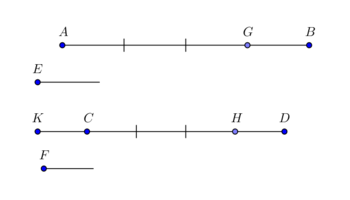 Therefore from Multiplication of Numbers Distributes over Addition, $AB$ is the same multiple of $E$ that $KH$ is of $F$.

Since then, each of the magnitudes $KH, CD$ is the same multiple of $F$.

Let $CH$ be subtracted from each.

This theorem is Proposition $6$ of Book $\text{V}$ of Euclid's The Elements.