It was Pizza Party Night, and as usual Ariel, Brandon, Charlie and Delia had gathered in Charlie's apartment to watch movies and order one of the biggest pizzas ever.

They always ordered the same one, with the same toppings, which the gang's resident mathematician Charlie then split expertly with his pizza-cutter so as to distribute it evenly between the four of them: 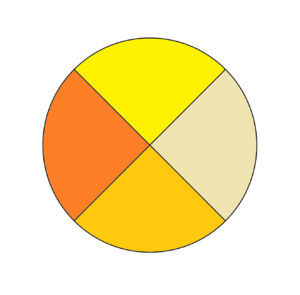 Until one fateful night when the pizza company changed the shape of the pizza.

No longer was it round, it was oval.

Charlie then had the problem: at what angle to each other should the cuts across the pizza be, so that they all had identically-sized pieces? 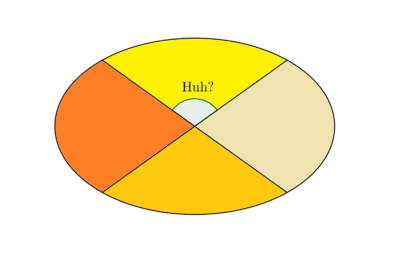 Charlie: "Hey guys, got a bit of a problem."

Charlie: "No, it's just that I can't work out how to cut the pizza."

Brandon: "Surely as a mathematician you can work it out. It's a simple ellipse, isn't it."

Charlie: "Can't be certain it is actually a precise ellipse. It's oval, and it's symmetrical and all that, but unless I analyse exactly what shape of oval, I can't be completely certain exactly where to make the cuts so as to make sure we all get the same."

Ariel: "Honestly, before I met you, Charlie, I would never have believed anyone could be so uselessly bone-headedly idiotically clueless. Good grief. Give me the stupid cutter."

And having worked out the position of the dead centre of the pizza, with two neat, straight cuts she deftly sliced the pizza into four parts which the rest of the gang acknowledged were, indeed, as far as they could tell, pretty much equal.

This puzzle was invented in $2021$ by Matt Westwood one evening when the movie in question was a particularly boring musical. He hates musicals.