Relative Lengths of Lines Inside Circle 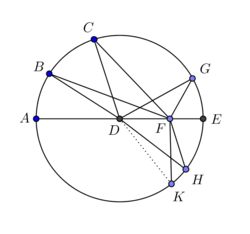 The proof is as follows.

From Sum of Two Sides of Triangle Greater than Third Side, we have that $DB + DF > BF$.

Therefore $FA$ is the greatest, followed by, in order of size, $FB, FC, FG$ and finally $FE$ is the smallest.

Also, from the point $F$ only two equal straight lines fall on the circle $ABCE$, one on either side of the least line $FE$.

Construct the angle $\angle FDH$ equal to $\angle GDF$ on the opposite side of $DF$, and join $FH$.

Another straight line equal to $FG$ will not fall on the circle from $F$.

For if this is possible, let $FK$ be that straight line.

But this contradicts what we proved earlier.

Therefore only one such straight line can be constructed.

This theorem is Proposition $7$ of Book $\text{III}$ of Euclid's The Elements.