All the nontrivial zeroes of the analytic continuation of the Riemann zeta function $\zeta$ have a real part equal to $\dfrac 1 2$.

The region defined by the equation $0 < \sigma < 1$ is known as the critical strip.

The line defined by the equation $\sigma = \dfrac 1 2$ is known as the critical line.

Hence the popular form of the statement of the Riemann Hypothesis:

All the nontrivial zeroes of the Riemann zeta function lie on the critical line. 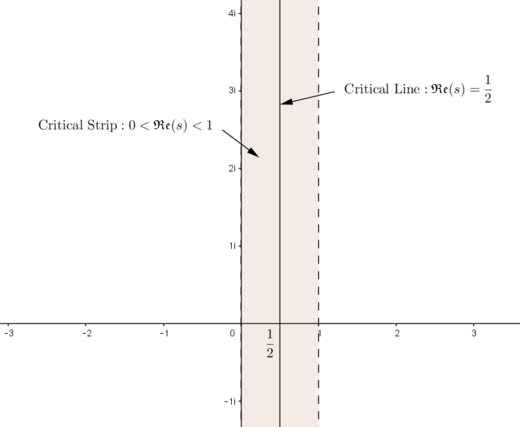 Some of the zeroes of Riemann $\zeta$ function are positioned as follows:

Trivial Zeroes of Riemann Zeta Function are Even Negative Integers

Let $\rho = \sigma + i t$ be a zero of the Riemann zeta function not contained in the critical strip:

These are called the trivial zeros of $\zeta$.

The first zero of the Riemann $\zeta$ function is positioned at:

This entry was named for Georg Friedrich Bernhard Riemann.

The Riemann Hypothesis was stated by Bernhard Riemann in his $1859$ article Ueber die Anzahl der Primzahlen under einer gegebenen Grösse.

It is the last remaining statement which has not been resolved is the Riemann Hypothesis.

This problem is the first part of no. $8$ in the Hilbert 23, and also one of the Millennium Problems, the only one to be in both lists.

In Riemann's words, in his posthumous papers:

[ These theorems ] follow from an expression for the function $\map \zeta s$ which I have not simplified enough to publish.

As Jacques Salomon Hadamard put it:

We still have not the slightest idea of what that expression should be. ... In general, Riemann's intuition is highly geometrical; but this is not the case for his memoir on prime numbers, the one in which that intuition is the most powerful and mysterious.

In $1914$, Godfrey Harold Hardy proved the Critical Line Theorem, that there exist an infinite number of nontrivial zeroes of the Riemann $\zeta$ function on the critical line.

This was again demonstrated in $1921$, by Godfrey Harold Hardy together with John Edensor Littlewood.

In $1974$, Norman Levinson demonstrated that At Least One Third of Zeros of Riemann Zeta Function on Critical Line.

By $1983$, systematic exploration of the critical strip with the aid of computers had shown that the first $3 \, 500 \, 000$ nontrivial zeroes were all located on the critical line.

While this is compelling, it is far from being a proof.

In December $1984$, it was announced that Hideya Matsumoto had found a proof, but this was shown to be flawed.