Tangent to Astroid between Coordinate Axes has Constant Length

Let $C_2$ be embedded in a cartesian coordinate plane with its center $O$ located at the origin.

Let $H$ be the astroid formed by the locus of $P$.

The segment of the tangent to $H$ between the $x$-axis and the $y$-axis is constant, immaterial of the point of tangency. 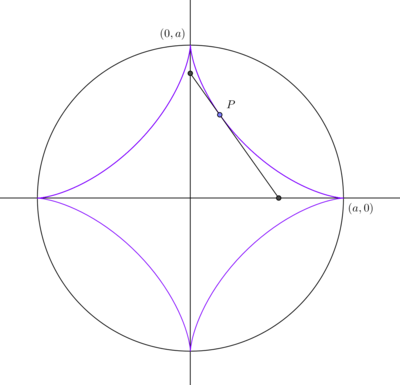 From Equation of Astroid, $H$ can be expressed as:

Thus the equation of the tangent to $H$ is given by:

This article, or a section of it, needs explaining, namely:
Find, or post up, the equation of a line of given tangent passing through point $\left({x, y}\right)$ as this is what is needed here
You can help $\mathsf{Pr} \infty \mathsf{fWiki}$ by explaining it. To discuss this point in more detail, feel free to use the talk page.

Similarly, the $y$-intercept is found by setting $x = 0$ and solving for $y$, which gives:

The length of the part of the tangent to $H$ between the $x$-axis and the $y$-axis is given by: