If two triangles have:

That is to say, if two pairs of angles and the included sides are equal, then the triangles are congruent. 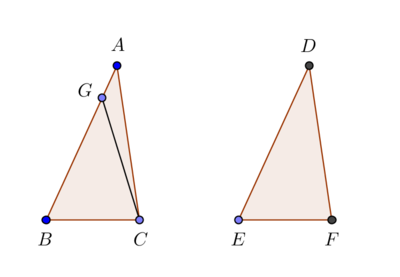 Aiming for a contradiction, suppose that $AB \ne DE$.

If this is the case, one of the two must be greater.

Without loss of generality, we let $AB > DE$.

Now, since we have:

it follows from Triangle Side-Angle-Side Equality that:

But from Euclid's fifth common notion:

which is a contradiction.

So from Triangle Side-Angle-Side Equality:

This proof is the first part of Proposition $26$ of Book $\text{I}$ of Euclid's The Elements.
It appears to have originally been created by Thales of Miletus.