From ProofWiki
< User:Jshflynn
Jump to navigation Jump to search

We frequently show that two concepts are equal.

How about showing that two concepts are not equal is that important?

If we were to have an example namespace from the beginning then I would say that:

As soon as the concept of Abelian Group is defined it must be proved that there are groups that are not Abelian otherwise we are unjustified in introducing the concept. In particular we would have to add an example to the examples of groups that we would call a strong example relative to Abelian Group

I need other opinions on this.

I refer you to the P = NP problem for an example where it is very relevant to introduce a new class of concepts (as a sub- or superclass of something bigger), even though we don't know whether or not it is a proper sub- or superclass. Other factors of importance are e.g. conceptual clarity or convenience. OTOH if two classes are not equal then it would be apt to have examples in every appropriate part of the resulting Venn diagram. — Lord_Farin (talk) 18:19, 25 February 2013 (UTC)

What is this in disguise?

I can't seem to find where but someone proposed a table for all the names of the algebraic structures (or should I say varieties :) ) given which axioms they have.

We could do the same for metrics (and possibly other structures) seeing as how I read today that nearly every possible weakening of those axioms has been studied.

Also speaking of tables you could possibly have a table showing which axioms are independent. Hmm... needs more thought.

I've been seeing these "compound pages" a lot lately with basic properties of a function listed or all the little variations that a word may have and I like them a lot indeed.

Square matrices partitioned as a checkerboard would be.

Is this closed under matrix multiplication?

What is the set of left identities?

It looks like the set of square matrices is closed under matrix multiplication. So it's both a vector subspace and a ring. Assuming the standard convention that there is a white square at the lower right corner. --Anghel (talk) 23:11, 6 February 2013 (UTC)

I am trying to understand just the essence of Double Orthocomplement is Closed Linear Span.

I see the orthocomplement is the whole of the $y$ axis.

What's the closure of the $x$ axis if I think of the usual topology on $\mathbb R^2$?

Surely it's not the $x$ axis unioned with the $y$ axis?

I've made a mistake.

Can anyone help me understand how?

For now I find it most relaxing adding sources and references :)

If you find yourself typing "Definition:" or some other key sequence repeatedly I have found the program AutoHotKeys to be very good:

The act of moving one's hand to the mouse, then the pointer to the link below, then click, then move hand back to keyboard is generally more expensive than simply typing the string yourself. Moreover, it presupposes that one does not use an external editor for PW (which I have started to do just a few days ago, the highlighting and improved search/replace functionality make it worthwhile). Thank you Jshflynn, I'll consider it later, when I get home. --Lord_Farin (talk) 12:04, 14 December 2012 (UTC)

Each to his/her own - but I have less patience with learning new stuff nowadays. Keeping up with tech is becoming a headache and more than. The links below the edit pane are just what I need. --prime mover (talk) 20:13, 14 December 2012 (UTC)

In graph theory I think that connectedness of vertices is an equivalence relation and the elements of the quotient set are the components of the graph. If that's true I don't know if it's worth proving. --Jshflynn (talk) 21:04, 21 December 2012 (UTC)

It seems to be correct (assuming that connectedness means "exists path" and the graph is undirected). Worth adding, I think. --Lord_Farin (talk) 21:58, 21 December 2012 (UTC)

Excellent. Had I simply Ctrl F'd 'Equivalence' on the proof index page I would have found it and the corollary that alphabetically precedes it. If you would like a break from the topology section (which is coming along fantastically btw) here's another easy one: "The deletion of a cyclic edge in a complete graph is a complete graph" (the book I am reading at the moment though calls cycle's circuits and what you might think would be called a 'circuitous edge' is just a 'circuit edge', it is from 1981 however so there could have been a terminological shift since then). --Jshflynn (talk) 23:23, 21 December 2012 (UTC)

I will have to deposit this here for the future:

I am keeping a note here of emerging phenomena on ProofWiki for me to think about. I am aware it is not organised.

Just noticed this. I don't see this as being a problem. Certain theorems are "end points" in that they exist as an end in themselves. FLT is an example I can think of (although you'll tell me it has a use now).

Lemmas should carry on existing in the Theorems namespace, because it's not a hard-and-fast rule as to what is a lemma and what is a theorem. Lemmas are identified (usually) by having "Lemma" at the top instead of "Theorem".

Examples I'm less sure about. What I am sure of is that I would rather they did not clutter up a definition page (or proof page, come to that) but should have standalone pages. What we could do is have example categories as subcategories of either theorem or definition categories (but I understand that the namespace paradigm may be compromised by the latter - does that matter?) There could be a specific template that would go into an "example" category like we have in the existing categories and subcategories. But I haven't gone down that route because the concept of examples in general (except for the instances of topologies and groups etc.) does not interest me much. --prime mover (talk) 19:46, 18 January 2013 (UTC)

I am trying to categorise the 'complaints' into broad categories and see if there is a sweeping solution for each of them. You may improve the list if you wish:

Captain's log: I have managed to open the database. There is a lot of excess data in there.

Managed to create a program which can output:

I am leaving it to run in the background. It will take about 6 hours.

Ugh. Came back to PC and there was an error with the 2000th file. Getting there though...

From there I will see if I can make the GML script.

So I have the necessary data to make the graph.

For phase 1 I will just be making a simple graph that shows the connections between the definitions.

For phase 2 I'm going to colour the nodes according to their category. There are two problems though:

1. Deciding on the colouring scheme.

2. One very notable contributor on here is colour blind so I will have to find some way around that.

So here is what I'm working with:

It is incomplete because proofwiki is not yet perfectly monolithic (in the words of PM) and I want to get the project moving. I believe it is sufficient to give a simple overview :)

Can you find places in it where it is inaccurate / incomplete because of ProofWiki's lack of being completely monolithic? That is, can it be used to provide direct feedback on PW's tightness and internal cohesiveness? --prime mover (talk) 19:38, 18 January 2013 (UTC)

Very cute, indeed.
One apparent problem: the dictionary doesn't look at subpages. For instance, the entry for the word coprime is empty. This is because the page Definition:Coprime has been refactored to a degree that it doesn't link to anything but subpages, which isn't registered in the dictionary.--Anghel (talk) 19:47, 18 January 2013 (UTC)

Essentially my Macro is hunting for sections on definition pages that are headed by either "== Definition ==" or "== Formal Definition ==". It then pulls out what it sees as valid links from inside those sections.

There are some sections that are headed by "== General Definition ==" instead which is perfectly valid, I just had never seen them before.

I think I should take back what I said as looking further into it the whole problem seems to be with my program handling redirects and subpages. I think I will leave this for phase 2 though as I'm rather impatient to see if the "convert list to graph" stage of the project is actually doable. --Jshflynn (talk) 19:54, 18 January 2013 (UTC)

How coincidental that I was attending to the comma issue just now before I read this. You have the instincts of a programmer it seems. Thanks for the heads up on those accents, I don't think anybody would be to pleased seeing "G?nter" or something of that sort where their name should be :) --Jshflynn (talk) 22:17, 18 January 2013 (UTC)

It's going to be slow because it's an applying algorithm to optimise the layout.

On how it turned out 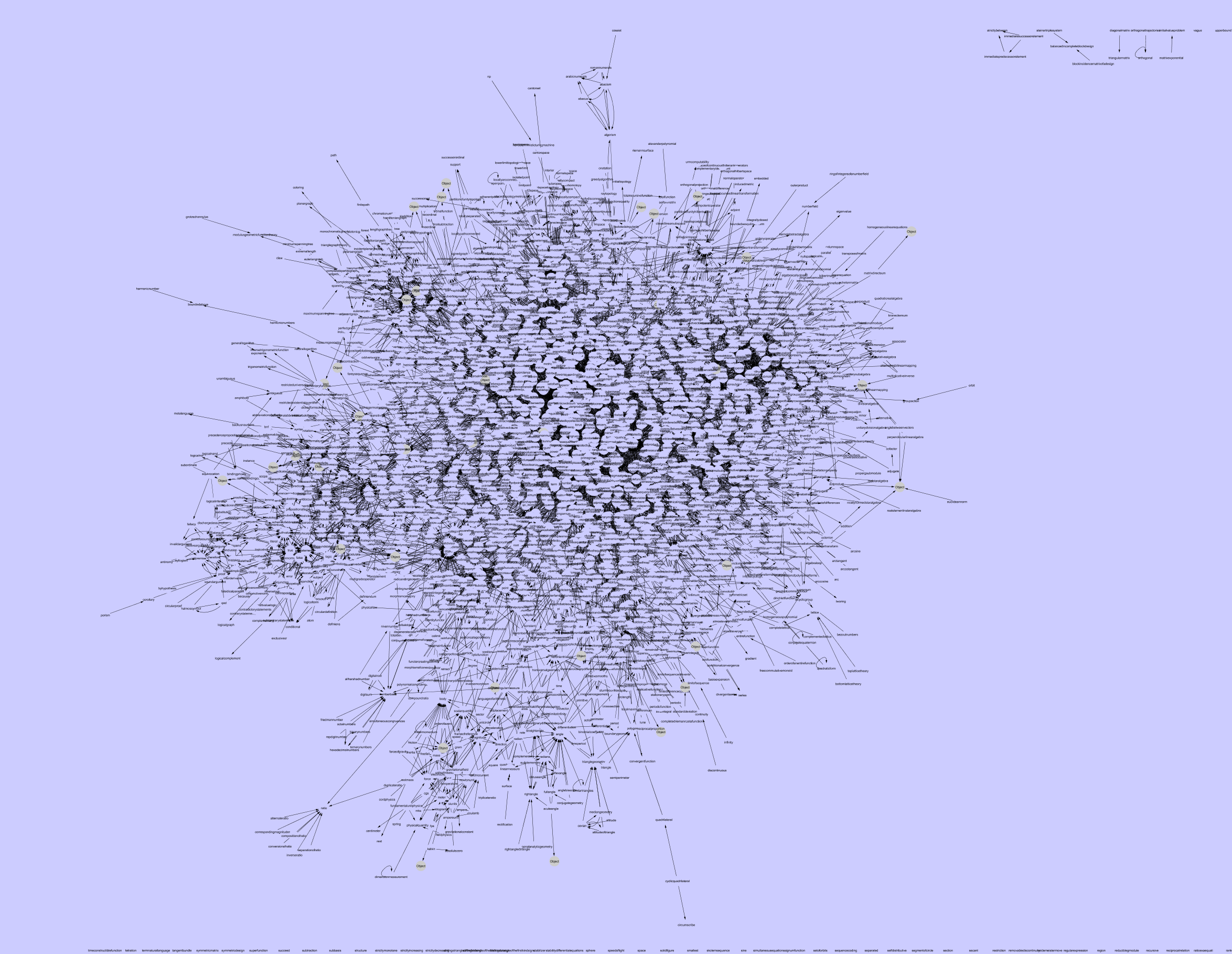 If A points to B then A is defined in terms of B.

The graph was produced using XGMML (approximately 75000 lines generated by a macro). There are some problems and explanations due of how they may be handled in the future:

If you dislike it in its entirety I would politely ask that you withhold your tongue as in spite of how poorly it turned out it did require a lot of work to make.

I'd like to thank Joe for directing me to the DB dump along with the rest of you for your encouragement along the way.

And now I shall get some rest :)

Sure thing GFauxPas. I'm going to tweek it so that the words fit and aren't all run together. I assume you are [email protected]? If not just email me at [email protected] to set up a comm. link. --Jshflynn (talk) 00:53, 8 February 2013 (UTC)