A Possible Next Direction

I was planning on starting on a project for a website/wiki about proofs, but if I could just incorporate some things into this website that would also work, and probably make things much easier.

Something that I would like to see, which this website does to some extent, is the breaking down of complex mathematical topics all the way down to the simplest axioms(regardless of which they are, and one could use multiple systems) and explicitly stating every step of the way. If one has the time, why not boil down a complex theorem as far down as it can go? Is that not basically the essence of proof anyhow?

One idea is that you could use flowcharts to state every pre-established concept that the proof makes use of. With this someone could also take a famous proof that they might find interesting, and then easily find the exact path(s) of what concepts, theorems, etc. are necessary to understand before they attempt to understand the proof in question.

Attached is one 'proof of concept' I was going for with the Pythagorean Theorem from Book I of Euclid's Elements(currently excluding definitions). In this case I didn't flesh out any proposition that already had been fleshed out somewhere else in the image. 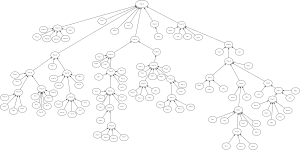 Of course, it doesn't have to be in this exact format. With a website one can use hyperlinks, or make the individual branches collapsible, or use other tricks to make things more convenient.

This site already does make use of links in many proofs, which is great. The basic framework is already pretty much here, I just think it could be expanded upon and/or organized further. There wouldn't need to be a flowchart or a similar map for every proof, but wouldn't it make things more accessible/easier to understand?--Alexelam (talk) 04:25, 8 April 2021 (UTC)

The philosophy that you have described is exactly what the $\mathsf{Pr} \infty \mathsf{fWiki}$ manifesto states. In theory, every proof can (ultimately) be broken down into a chain of definitions and axioms, all the way back to ZFC and (in the case of geometry) Euclid.

There are very likely to be instances of where we have not gone all the way back to axioms, for example, for advanced proofs using basic arithmetic. Reminding the user of the rigorous definition of real addition based on abstract algebraical constructs in field theory backed up by the ZFC construction of the natural numbers is probably overkill -- but the structure to support has already been put in place on $\mathsf{Pr} \infty \mathsf{fWiki}$ (it was one of the first things we did). The philosophy is indeed already there.

I see your diagram for Pythagoras's Theorem but it's too small, and when I try to embiggen it, I find that the contents of the nodes have lost their definition. However, I suspect that there are repeated instances of the most basic axioms and definitions. I can totally see where you are coming from, but it might be more profitable to use a directed acyclic graph structure. (Fun fact: by strange coincidence, I was in the process of implementing one of those for a project in my day job while at the same time reading Stephenson's "Anathem". The significance of this would become apparent to a reader of at least the appendices of that literary work.) --prime mover (talk) 05:24, 8 April 2021 (UTC)

The file is an SVG so it should retain its definition, if you just click on it and then again at the file page. But you are right that there are redundancies, which is partly why I wasn't sure if links(or color coding) would work better or not. I didn't think of the acyclic graph idea, which is pretty good. I suppose that what I was going for was more of a UI reworking than a philosophical one, at least for proofwiki.
For now I'll probably just make a couple of them and try to add them as an image to the theorem's page.

I personally would like to see some worked examples of ZFC, for as much discussion as it gets, but I get that most people don't need that much rigor. Of course not every proof needs to go all the way back, if it's simply linking up with what has been established on another page.
--Alexelam (talk) 06:19, 8 April 2021 (UTC)

For it to be useful, such a diagram should be immediately comprehended by a single glance. I would gather that such a diagram should be designed first and foremost as an aid to understanding rather than an exercise in ingenuity, and so the user should not need to zoom in as though scanning it through a microscope. In my past career as a software engineer, I had great experience with documentation which did little to aid the understanding of a function, consisting of such tree-diagrams, and (beyond bulking out the bumph in order to bamboozle a client into believing we had provided the documentation required) it never actually did the job of explaining how it worked.

And, as I said above, if you've got multiple instances of the same node in a given tree, it really is not a tree. A proof is not in general a tree. It is a directed acyclic graph. IMO this is a vitally important concept which is vanishingly rarely emphasised in the mathematical discipline of proof theory. The latter is almost universally taught informally with a considerable amount of intuitive reliance on the concept of "circularity" without ever once indicating what that actually means.

Now none of the above paragraph is actually implemented in $\mathsf{Pr} \infty \mathsf{fWiki}$, mainly because I have not encountered a reliable primary source which discusses the matter properly -- it is just something that is acquired in the mind of the student by gradual osmosis. We have gone no further down the road of philosophical logic than the basic axioms of natural deduction, and sufficient faltering steps towards establishing some framework of mathematical logic, so the field here is wide open for someone who a) understands sufficient about this field as to be able to communicate it lucidly, and b) has adequately embraced the philosophy of this site as to be able to transfer that understanding to a suite of pages on $\mathsf{Pr} \infty \mathsf{fWiki}$ that present it. --prime mover (talk) 06:41, 8 April 2021 (UTC)

Change of base formula for logarithms

I placed a comment and alternate discussion at Talk:Change_of_Base_of_Logarithm--Guy vandegrift (talk) 21:38, 18 December 2021 (UTC)

I finished the second proof on Change of Base of Logarithm. I hope you like it, but will move it to Wikiversity if you don't. I greatly enjoyed learning about Proofwiki, and will certainly emulate portions of your style in my future efforts on Wikiversity. I strongly advocate the development of parallel proofs on the freely available internet. My vision is for colleges to someday utilize these proofs as part of an open source bank of "undergraduate prelim" exams that are described on the Wikiversity page: [[Quizbank/Cost-benefit analysis/Undergraduate prelims]].--Guy vandegrift (talk) 23:25, 19 December 2021 (UTC) (I am also [[User:Guy vandegrift]] on Wikiversity)

No doubt you have seen how your proof has been incorporated into our page Change of Base of Logarithm.

Note that the extra discussionary material is in general not the way we do things on $\mathsf{Pr} \infty \mathsf{fWiki}$, unless it's a particularly troublesome, confusing or controversial concept, for example AoC, LEM etc. I think we already have $\log_a b = \dfrac 1 {\log_b a}$ as a page in its own right. If not, then can be added to Change of Base of Logarithm as a simple corollary. I'll get round to looking at it, but I'm not up to anything more intellectually challenging than a Dudeney puzzle-book right now, and even that's hard work. --prime mover (talk) 12:22, 20 December 2021 (UTC)

I am a bit concerned about the reference to "randomly" selecting from $\{a,b\}$ in the "proof" (it's more of a derivation). Perhaps I can cook up a phrase that explains that other choices yield equivalent results, but not the exact equation. I think the randomness is essential because I liked to derive all my own formulas whenever possible. My proof is easy to remember only if no effort is made to make the "correct" choices. Perhaps we need a concluding sentence, e.g., "Other choices involving $\{a,b\}$ yield formulas that are equivalent to this result". If you wish, I would be happy to put a bit more thought into this and make an edit.--Guy vandegrift (talk) 16:25, 20 December 2021 (UTC)

Proposed change to two of your pages

No it doesn't. That page is a subpage of the page defining a summation by an inequality, and such is that notation that superscripts are not used. And no sigma has been omitted, as far as I can see. --prime mover (talk) 18:53, 16 January 2022 (UTC)

Would you me like to insert the enhancement into $\mathsf{Pr} \infty \mathsf{fWiki}$ by editing those pages? I ask because I am unfamiliar with both the editorial policies and intended scope of ProofWiki and don't want to waste my time on something that will get reverted.--Guy vandegrift (talk) 18:35, 16 January 2022 (UTC)

No thank you, as I don't understand what you're talking about.

I recall seeing a remark by you somewhere (couldn't find where, that's why I came here) that use of the extension's transclusion would not present a link in the "What links here" section.

Does this address your concern regarding "What links here", or are there cases where we do not want a title?

Btw, I am aware of the TOC and other problems with the extension, but unfortunately they are more complicated to tackle, so one thing at a time. — Lord_Farin (talk) 10:21, 22 March 2022 (UTC)

As long as "what links here" genuinely does show all pages which transclude a given subpage we are golden. Unfortunately, there is a drawback in that the parent page is not listed as a transclusion, which makes it less than perfect. If we can fix that issue it would be a great improvement.

We need to investigate what happens when the name of a transcluded page is not in <parent page>/<subpage> format. In that latter case, the link at the top to the direct parent page is apparent - in other cases it is not. We may be able to get round this with consistent use of redirects. --prime mover (talk) 11:28, 22 March 2022 (UTC)