By the Axiom of Choice, there is a choice function $c$ defined on $\powerset S \setminus \set \O$.

We will use $c$ and the Principle of Transfinite Induction to define a bijection between $S$ and some ordinal.

Basis for the Induction

The process eventually stops, else we have defined bijections between subsets of $S$ and arbitrarily large ordinals. 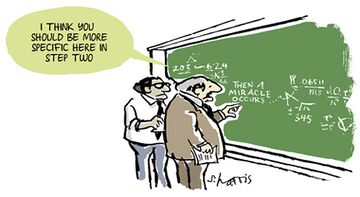 This article contains statements that are justified by handwavery.
You can help $\mathsf{Pr} \infty \mathsf{fWiki}$ by adding precise reasons why such statements hold.

This result is also known as Zermelo's Theorem, for Ernst Friedrich Ferdinand Zermelo.

Under this name it can often be seen worded:

Every set of cardinals is well-ordered with respect to $\le$.

This is called by some authors the Trichotomy Problem.

It is also referred to as the well-ordering principle, but this causes confusion with the result that states that the natural numbers are well-ordered.

This theorem depends on the Axiom of Choice.