David Wells: The Penguin Book of Curious and Interesting Puzzles

Rational Number Expressible as Sum of Reciprocals of Distinct Squares

Think of a Number: Rhind Papyrus $28$

The Puzzles: Think of a Number

Problem $29$ of the Rhind papyrus is not quite so clear, but it is plausibly the first ever 'Think of a Number' problem. It reads ...

A triangular field is to be divided between six brothers by equidistant lines parallel to one side. The length of the marked side is $6, 30$ and the area is $11, 22, 30$. What is the difference between the brothers' shares?

The Puzzles: Light Reflected off a Mirror: $19$

The Puzzles: Light Reflected off a Mirror: $20$

Inscribing Equilateral Triangle inside Square with a Coincident Vertex 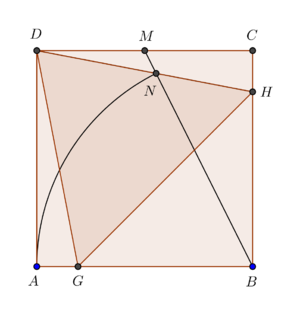 Dissection of 2 Regular Hexagons into One

Yang Hui (c. $1270$ ad) wrote an 'Arithmetic in Nine Sections', which contains the very first extant representation of what we in the West call Pascal's Triangle (from an earlier Chinese source, c. $1000$ ad). His book was called, apparently, Hsu Ku Chai Chi Suan Fa ($1275$). It contains the following magic configuration: ...

The Puzzles: The Josephus Problem: $99$

On board a ship, tossed in storms and in danger of shipwreck, are fifteen Christians and fifteen Turks. To lighten the load and save the ship, half are to be thrown overboard. One of the Christians suggests that all should stand in a circle and every ninth person counting around the circle should be chosen. How should the Christians arrange themselves in the circle to ensure that only the Turks die?

The Christians and Turks should be placed in the following circular order, in which the first person follows the last, and the counting starts with the first person: $\text {CCCCTTTTTCCTCCCTCTTCCTTTCTTTCCTT}$.

What is the unique Heronian triangle with area $24$?

Arrange 3 Knives to Rest on Tips of Handles: Variant

Balance a Stick on its End on a Finger

How can a stick be made to balance securely on the tip of a finger?

Force the tips of three knives into the stick, so that the knives hang well below the finger.
The centre of gravity of the entire arrangement will then be below the fingertip and will be stable.

The next problem occurs first in Urbino d'Aviso's treatise on the sphere (1682):

Our short table shows the probabilities, rounded to three decimals, of obtaining the mean number or more sixes when $6 n$ dice are tossed.

Number of Derangements on Finite Set

The Puzzles: The misaddressed letters: $130$

A correspondent writes ten letters and addresses ten envelopes, one for each letter. In how many ways can all the letters be placed in the wrong envelopes?

The solution given is:

The Puzzles: The Thirty-six Officers Problem: $135$

How can five each of As, Bs, Cs, Ds and Es be placed in these cells so that no letter is repeated in any row or column?

John Jackson was 'A Private Teacher of Mathematics' who decided that there were many puzzles scattered around, but not collected together in one small and convenient volume, so he assembled them himself and wrote Rational Amusements for Winter Evenings, or, A Collection of above 200 Curious and Interesting Puzzles and Paradoxes relating to Arithmetic, Geometry, Geography, &, 'Designed Chiefly for Young Persons' , which appeared in London in $1821$.