A directed graph or digraph is a graph each of whose edges has a direction:

The arcs are the elements of $E$.

Informally, an arc is a line that joins one vertex to another.

As can be seen, in this general definition it is allowable for an arc to go in both directions between a given pair of vertices.

A directed graph or digraph $D$ is a non-empty set $V$ together with an antireflexive relation $E$ on $V$.

The elements of $E$ are the arcs.

Let $\mathbf {Set}$ be the category of sets.

A digraph is an arrangement of the following form in $\mathbf{Set}$:

Then $D$ is called a symmetric digraph.

If the relation $E$ in $D$ is also specifically asymmetric, then $D$ is called a simple digraph.

That is, in a simple digraph there are no pairs of arcs (like there are between $v_1$ and $v_4$ in the diagram above) which go in both directions between two vertices.

Then $D$ can be presented in diagram form as: 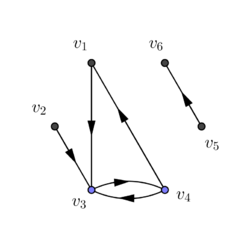