Both versions of the Directed Hamilton Cycle problem are NP-complete.

A Hamilton cycle in $G$ if one exists

no solution if not.

The solution path starts at $v_0$.

While $G$ has more then one vertex:

Finally add $v_0$ to the end of the solution path and we have our solution.

Every time $f \left({G}\right)$ is calculated at least one edge is removed.

This algorithm shows the functional problem polynomially reduces to the decision problem.

If the output of the functional problem is anything other than no solution then $G$ has a Hamilton cycle.

Thus the functional problem reduces to the the decision problem.

Given a potential solution to the decision problem in the form of a sequence of vertices it is possible to determine if that sequence is a Hamilton Cycle by:

making sure every vertex appears exactly once

verifying that each vertex in the sequence follows is adjacent to the previous vertex.

From NP Problem iff Solution Verifiable in Polynomial Time, a potential solution can be verified or rejected in polynomial time.

The objective here is to polynomially reduce the Conjunctive Normal Form Satisfiability problem with $m$ variables and $l$ clauses to the decision version of the Directed Hamilton Cycle problem.

Because CNF Satisfiability Problem is NP-Complete that is enough to show the Hamilton Cycle is NP-hard.

Consider the following diagram of a part of a graph: 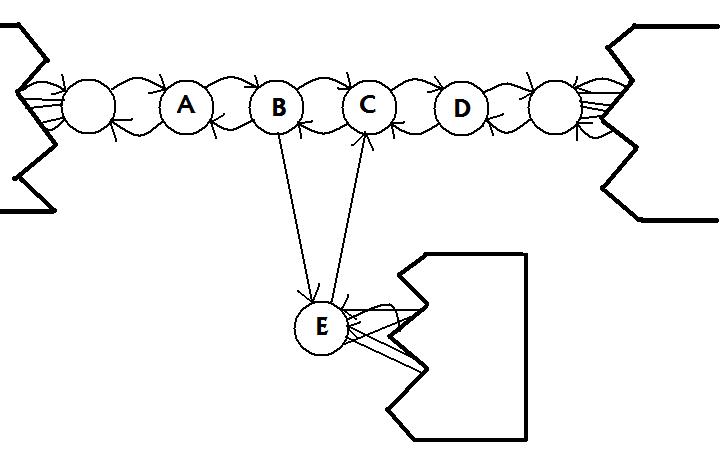 The three cases for these four vertices are:

In short, the four vertices $A, B, C, D$ must be visited in order or in reverse order.

Also, they can only visit the $E$ node if they are in the right order.

These pieces of the graph can be concatenated by letting the $D$ node of one piece be the same as the $A$ node of the next.

The final graph to be constructed takes a form similar to the following diagram:

The boxes represent concatenations of the pieces we have just studied.

In the final graph there will be one of these rows for every variable in the CNF SAT problem, each one linked to another row as shown here.

This creates a circuit through the rows.

In addition to these vertices there will also be one vertex for every clause in the original problem.

These will take the $E$ vertex position in the first diagram.

A vertex will have be attached to a pair of vertices in a row if the variable the row corresponds to appears in the clause, going:

left to right if the variable is not negated

right to left if it is negated.

Clearly all the vertices could only be visited in a cycle if there was some choice of direction for each of the rows that allowed all the $E$ type vertices to be visited.

That would only happen if there was some way of deciding values for the variables in the CNF SAT problem that gave each clause at least one true variable in its conjunction.

And so the graph has a Hamilton Cycle iff the CNF SAT problem has a solution.

Each variable can only appear in each clause once, otherwise that clause is either internally redundant or trivially satisfied
Each additional instance of a variable only requires three additional vertices

there are only three nodes of overhead.

Therefore the total number of vertices in the constructed graph is at most $3 l m + 3 m + l$ vertices.

Because the Directed Hamilton Cycle problem is NP and NP-hard it is NP-complete.

The proof is exactly the same as before, except instead of having all the rows in a complete circuit there is a gap, giving the Hamilton Path a definite starting and stopping point.