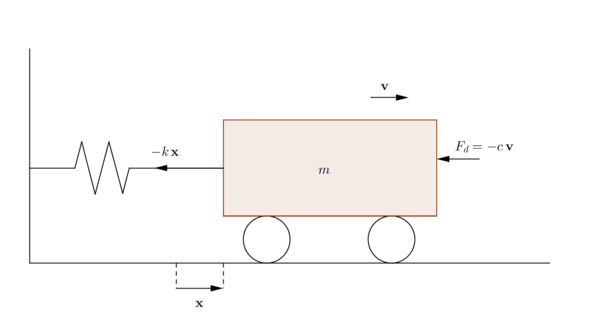 Let $C$ be free to move along a straight line in a medium which applies a damping force $F_d$ whose magnitude is proportional to the speed of $C$.

Let the constant of proportion of the damping force $F_d$ be $c$.

Let the displacement of $C$ at time $t$ from the equilibrium position be $\mathbf x$.

Then the horizontal position of $C$ at time $t$ can be expressed as:

Such a system is defined as being overdamped.

From Position of Cart attached to Wall by Spring under Damping: Overdamped:

It remains to evaluate $C_1$ and $C_2$ under the given conditions.

Differentiating $(1)$ with respect to $t$ gives: