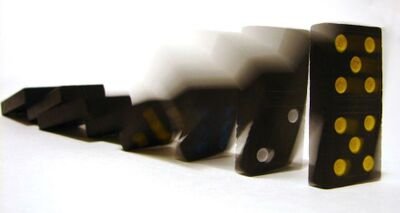 The Principle of Mathematical Induction is often likened to a domino cascade.

A line of dominoes is set up to be balanced on their ends so that if one of the dominoes is knocked over, it knocks over the next one in the line.

When the first domino is knocked over, the entire line topples, one after the other.

It follows that if either:

$(1) \quad$ no domino is knocked over to start with (that is, the basis for the induction does not hold)

$(2) \quad$ the gap between two dominoes is too large for one domino to knocked over the next one (that is, the induction step does not hold)

then the domino cascade does not work and the entire line does not fall (that is, the proposition is not proved for all $\N \ge n_0$).