Construction of Triangle from Given Lengths

Given three straight lines such that the sum of the lengths of any two of the lines is greater than the length of the third line, it is possible to construct a triangle having the lengths of these lines as its side lengths. 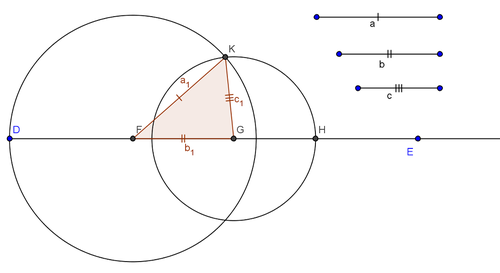 Let the three straight lines from which we are going to construct the triangle be $a$, $b$, and $c$.

Construct $DE$ and extend it beyond $E$.

Now we can construct a circle centered at $F$ with radius $DF$.

Similarly, we can construct a circle centered at $G$ with radius $GH$.

Call one of the intersections of the two circles $K$.

Without loss of generality, let this be the top one in the accompanying diagram.

Finally, we can construct the segment $FK$.

$\triangle FGK$ is the required triangle.

This proof is Proposition $22$ of Book $\text{I}$ of Euclid's The Elements.


Note that the condition required of the lengths of the segments is the equality shown in Proposition $20$: Sum of Two Sides of Triangle Greater than Third Side. Thus, this is a necessary condition for the construction of a triangle.

When Euclid first wrote the proof of this proposition in The Elements, he neglected to prove that the two circles described in the construction actually do intersect, just as he did in Proposition $1$: Construction of Equilateral Triangle.