From ProofWiki
(Redirected from Definition:Complement of Angle)
Jump to navigation Jump to search 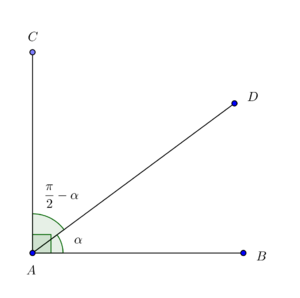 Then $\angle DAC$ is the complement of $\angle BAD$.

Hence we can say that $\alpha$ and $\beta$ are complementary.

It can be seen from this that the complement of an angle greater than a right angle is negative.

Thus complementary angles are two angles whose measures add up to the measure of a right angle.