The set complement (or, when the context is established, just complement) of a set $S$ in a universe $\mathbb U$ is defined as:

A common alternative to the symbology $\map \complement S$, which we will sometimes use, is $\overline S$.

The complement $\map \complement T$ of the set $T$ with respect to the universal set $\mathbb U$ is illustrated in the following Venn diagram by the coloured area: 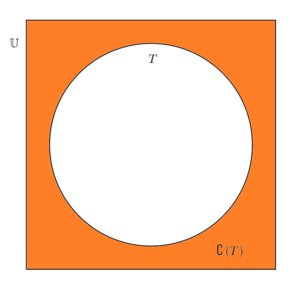 Some sources use the term absolute complement, in apposition to relative complement.

No standard symbol for this concept has evolved.

Alternative notations for $\map \complement S$ include variants of the $\complement$:

and sometimes the brackets are omitted:

You may encounter others.

Some authors use $S^c$ or $S^\complement$, but those can also be confused with notation used for the group theoretical conjugate.

Let the universe $\Bbb U$ be defined to be the set of real numbers $\R$.

the set of non-negative real numbers.

Let the universe $\Bbb U$ be defined to be the set of real numbers $\C$.

The concept of set complement, or logical negation, was stated by Leibniz in his initial conception of symbolic logic.