From ProofWiki
(Redirected from Definition:Degree of Vertex)
Jump to navigation Jump to search

The degree of $v$ in $G$ is the number of edges to which it is incident.

It is denoted $\map {\deg_G} v$, or just $\map \deg v$ if it is clear from the context which graph is being referred to.

If the degree of $v$ is even, then $v$ is called an even vertex.

If the degree of $v$ is zero, then $v$ is an isolated vertex.

The degree of a vertex is also known as its valency. 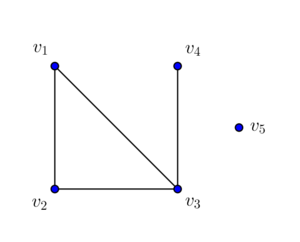 The degrees of the vertices of the above graph are:

You arrive at a small party with your partner, which $3$ other couples are also attending.

Nobody shook hands with themselves or their partners.

Nobody shook hands with anyone else more than once.

After all the handshaking had taken place, you asked each person, including your partner, how many times they had shaken hands.

Every person replied with a different answer.

$(2): \quad$ How many times did your partner shake hands?