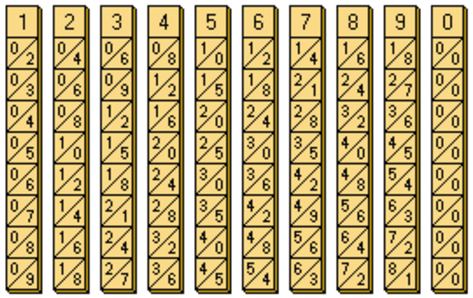 Napier's bones is a device for performing the operation of multiplication of numbers.

The device consists of:

a board upon which the rods can be placed, labeled $1$ to $9$ down a column on the left hand side, each digit corresponding to the numbers on the rods

The multiplicand is assembled by placing the rods for each of its digit next to each other on the board.

For each digit in the multiplicand, the numbers adjacent to each other on the row corresponding to the multiplier in each of the compartments formed by the diagonal lines aligned together are added together.

The product is thus formed.

This entry was named for John Napier.

Napier's bones are described by John Napier in his Rabdologiae of $1617$.