From ProofWiki
< Definition:Quadrilateral
Jump to navigation Jump to search

A trapezium is a quadrilateral with no parallel sides. 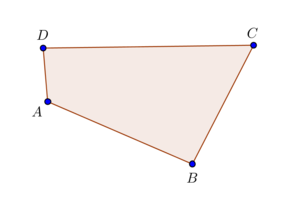 Outside the US (one of a few countries that use this definition), a trapezium is a quadrilateral which has one pair of sides parallel, that is, what the US defines as a trapezoid.

Outside the US (one of a few countries that use this definition), this figure is known as a trapezoid.

Euclid, in his definitions, did not distinguish between trapezia and trapezoids.

The plural of trapezium is trapezia.

The word comes from Latin, in which language it is a neuter noun of the second declension, hence its plural form.