In a given circle, it is possible to inscribe a regular pentagon.

In a given circle to inscribe an equilateral and equiangular pentagon. 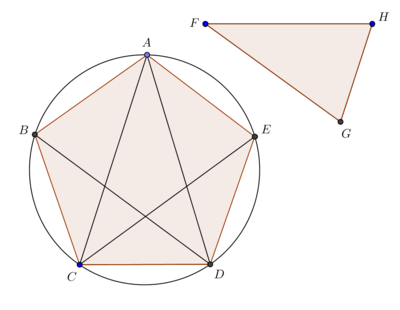 Let $ABCDE$ be the given circle (although note that at this stage the positions of the points $A, B, C, D, E$ have not been established).

Then the pentagon $ABCDE$ is the required regular pentagon.

From Equal Angles in Equal Circles it follows that the arcs $AB, BC, CD, DE, EA$ are all equal.

Hence from Equal Arcs of Circles Subtended by Equal Straight Lines, the straight lines $AB, BC, CD, DE, EA$ are all equal.

So the pentagon $ABCDE$ is equilateral.

So from Angles on Equal Arcs are Equal $\angle BAE = \angle AED$.

So the pentagon $ABCDE$ is equiangular.

This theorem is Proposition $11$ of Book $\text{IV}$ of Euclid's The Elements.