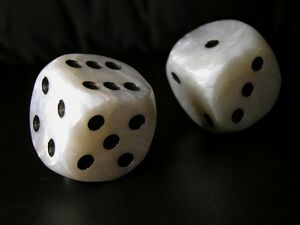 A die (plural: dice) is a device for generating random numbers, traditionally between $1$ and $6$.

A die usually consists of a cube on which each face denotes a different number, usually (again) from $1$ to $6$.

Traditionally, opposite faces add to $7$, so:

The idea is that when you roll it, or throw it, or otherwise cause it to land upon a flattish surface, one of the sides will be face-up, and (with a good design of die) which side that is can not be precisely predicted.

Hence it serves as a generator of a discrete uniform distribution.

By using dice with different shapes (usually either platonic solids or prisms), a different probability space can be generated.

Dice have been around for thousands of years.

An early reference to the design of a die can be found in W.R. Paton's $1918$ translation of The Greek Anthology Book XIV:

The numbers on a die run so: six one, five two, three four.

Note that the plural of die is dice.

Beware the tendency to use the word dice as a singular noun:

I threw a dice and it came up six

as this (while colloquial) is technically incorrect.