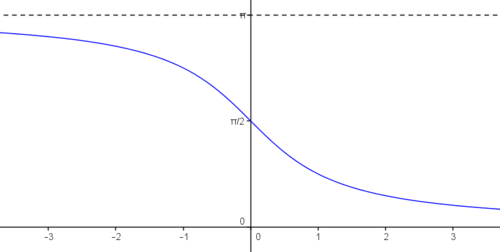 From Shape of Cotangent Function, we have that $\cot x$ is continuous and strictly decreasing on the interval $\openint 0 \pi$.

From the same source, we also have that:

Thus from Inverse of Strictly Monotone Function, $\map g x$ admits an inverse function, which will be continuous and strictly decreasing on $\R$.

This function is called arccotangent of $x$ and is written $\arccot x$.

There exists the popular but misleading notation $\cot^{-1} x$, which is supposed to denote the inverse cotangent function.

However, note that as $\cot x$ is not an injection, it does not have a well-defined inverse.

The $\arccot$ function as defined here has a well-specified image which (to a certain extent) is arbitrarily chosen for convenience.

Therefore it is preferred to the notation $\cot^{-1} x$, which (as pointed out) can be confusing and misleading.

However this can also be confusing due to the visual similarity between that and the lowercase $\text c$.

The symbol used to denote the arccotangent function is variously seen as: