A pendulum is an ideal body consisting of two parts: 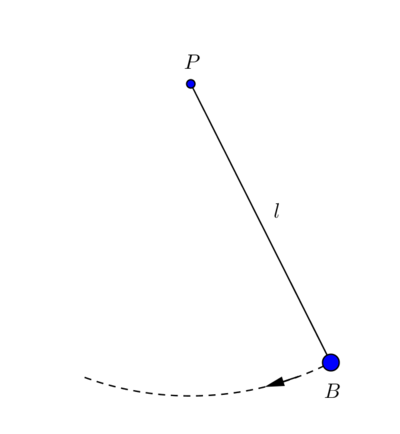 The pendulum is embedded in a gravitational field.

The point mass at the free end of the rod of a pendulum is called the (pendulum) bob.

Hence the bob is free to swing under the effects of the gravitational field.

The period of a pendulum is the time period through which the bob takes to travel from one end of its path to the other, and back again.

The ideals of a pendulum are as follows:

The rod is of zero thickness, infinite stiffness and zero mass.

The pivot is immovable and has zero friction.

The bob is of zero volume.

The gravitation field is (usually) taken to be constant and uniform.

The medium in which the pendulum moves offers no resistive force, unless otherwise specifically stated.

Some treatments specify that, instead of a rod, the bob is suspended from the pivot by a cord.

The treatment is similar to that of the rod, but the behaviour of the pendulum when the bob rises above the pivot is different.

In all cases, the statement of the problem should define which arrangement is in effect.

A pendulum as defined here is often referred to as a simple pendulum, so as to distinguish it from a compound pendulum.

The word pendulum is a neo-Latin word, deriving from the Latin pendulus, meaning hanging.