Consider a ray of light crossing the threshold between two media.

Let it meet the threshold at:

Then the Snell-Descartes law states that:

The Snell-Descartes law can be derived from Fermat's Principle of Least Time as follows: 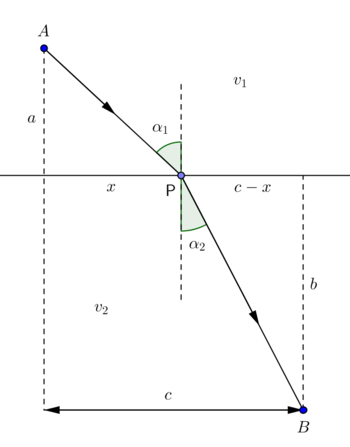 The total time $T$ required for that journey is:

from the geometry of the above diagram.

From Fermat's Principle of Least Time, this time will be a minimum.

From Derivative at Maximum or Minimum, we need:

which leads directly to:

by definition of sine.

This law can also be seen expressed as:

This entry was named for Willebrord van Royen Snell and René Descartes.

Willebrord van Royen Snell made his discovery in $1621$.

René Descartes was first to publish it, which he did in $1637$. Snell's own work did not appear until $1703$ when Christiaan Huygens included it in his Dioptrica.

It may well indeed be that Descartes himself learned it from Snell, who now generally holds the credit for its discovery.

It needs to be noted that this law had previously been discovered by several other scientists, including Ibn Sahl in $984$ and Thomas Harriot in $1602$.

In France this law is called la loi de Descartes or loi de Snell-Descartes, while elsewhere it tends to be known as Snell's law, or Snell's Law of Refraction.