If a triangle has two angles equal to each other, the sides which subtend the equal angles will also be equal to one another.

Hence, by definition, such a triangle will be isosceles. 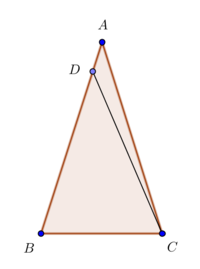 Suppose side $AB$ is not equal to side $AC$. Then one of them will be greater.

We draw the line segment $CD$.

But $\triangle DBC$ is smaller than $\triangle ACB$, which is absurd.

A similar argument shows the converse, and hence $AB = AC$.

Let $\angle ABC$ and $\angle ACB$ be the angles that are the same.