The area of a cyclic quadrilateral with sides of lengths $a, b, c, d$ is:

where $s$ is the semiperimeter:

The area of a cyclic quadrilateral with sides of lengths $a, b, c, d$ is: 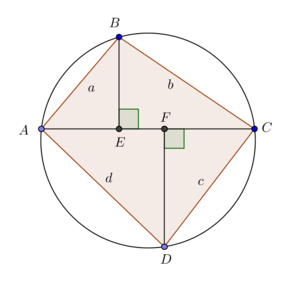 From Area of Triangle in Terms of Two Sides and Angle:

From Opposite Angles of Cyclic Quadrilateral sum to Two Right Angles, $\angle ABC + \angle ADC$ equals two right angles, that is, are supplementary.

Applying the Law of Cosines for $\triangle ABC$ and $\triangle ADC$ and equating the expressions for side $AC$:

Substituting this in the above equation for the area:

When we introduce the expression for the semiperimeter:

the above converts to:

Some sources refer to this as the Archimedes-Heron-Brahmagupta formula, for Archimedes of Syracuse and Heron of Alexandria as well as Brahmagupta.

The Heron of Alexandria connection comes from the application of this to the triangle to obtain Heron's Formula.

The reference to Archimedes of Syracuse comes from the possibility that (despite Heron being the one to publish) he may have been the one to first come up with Heron's Formula.

This entry was named for Brahmagupta.

While Brahmagupta's Formula bears the name of Brahmagupta, it was apparently known by Archimedes of Syracuse.