Circle is Bisected by Diameter

A circle is bisected by a diameter.

By definition of diameter, $AB$ passes through $C$.

Aiming for a contradiction, suppose that $AB$ does not bisect $ADBE$, but that $ADBC$ is larger than $AEBC$. 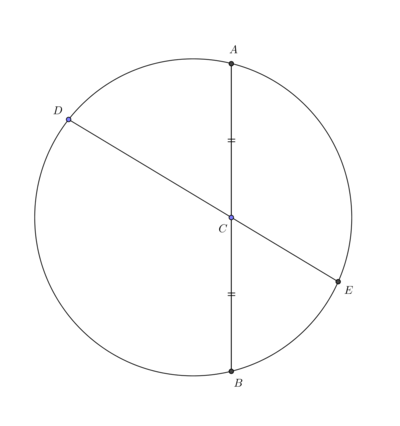 Thus it will be possible to find a diameter $DE$ passing through $C$ such that $DC \ne CE$.

By Euclid's definition of the circle:

A circle is a plane figure contained by one line such that all the straight lines falling upon it from one point among those lying within the figure are equal to one another;
And the point is called the center of the circle.

That is, all radii of $ADBE$ are equal.

From this contradiction it follows that $AB$ bisects the circle. 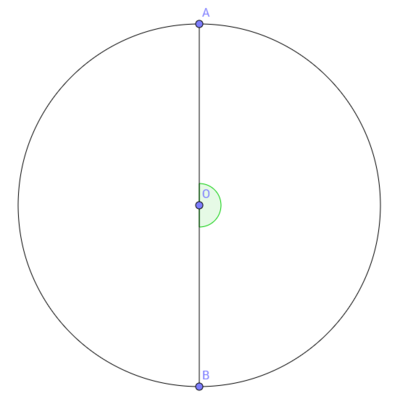 Let $AB$ be a diameter of a circle whose center is at $O$.

By definition of diameter, $AB$ passes through $O$.

$\angle AOB\cong\angle BOA$ because they are both straight angles.

Thus, the arcs are congruent by Equal Angles in Equal Circles:

Hence, a circle is split into two equal arcs by a diameter.

The result that a Circle is Bisected by Diameter was supposedly attributed to Thales of Miletus by Proclus Lycaeus.

Euclid defines the diameter as the line which passes through the center, but then assumes that it necessarily bisects it:

According to Julian Lowell Coolidge in his A History of Geometrical Methods:

It seems strange that Thales, a disciple of the Egyptians, should bother to demonstrate something which Euclid takes as self-evident. Proclus suggests that he proved it by folding the circle over the diameter.