In isosceles triangles, the angles at the base are equal to each other.

Also, if the equal straight lines are extended, the angles under the base will also be equal to each other.

In isosceles triangles the angles at the base are equal to one another, and, if the equal straight lines be produced further, the angles under the base will be equal to each other. 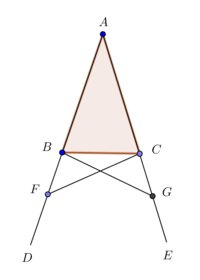 Let $\triangle ABC$ be an isosceles triangle whose side $AB$ equals side $AC$.

We extend the straight lines $AB$ and $AC$ to $D$ and $E$ respectively.

They contain a common angle, that is, $\angle FAG$.

Also, we have already proved that $\angle FBC = \angle GCB$, and these are the angles under the base of $\triangle ABC$.

This proposition is the famous pons asinorum, that is, the bridge of donkeys, supposedly for two reasons:

$(1): \quad$ The diagram accompanying it is supposed to look a bit like a bridge
$(2): \quad$ If you can't cross this bridge (that is, understand this theorem), you're supposedly a bit of a donkey.

Don't blame the students -- this is one of the more tortuous ways of proving this theorem.

Commentators have speculated that Euclid may not have known what he was doing when he wrote this.

This theorem is Proposition $5$ of Book $\text{I}$ of Euclid's The Elements.
It is the converse of Proposition $6$: Triangle with Two Equal Angles is Isosceles.


It appears to have originally been created by Thales of Miletus.